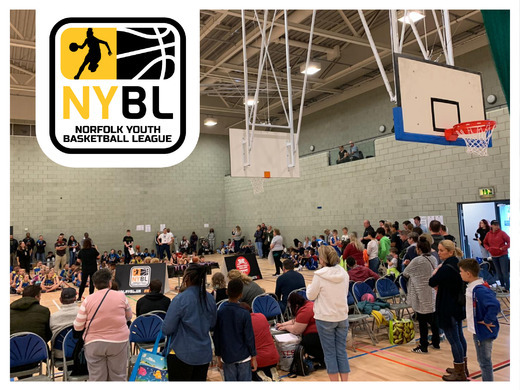 The day tipped off with a busy U11 division featuring 15 fixtures played on three half-courts. Norwich-based Basketball in the Community took home the first monthly winners trophy - awarded at each U11 competition to the team with the most points - with a 5-0 record against stiff competition that included teams from clubs and schools spanning three different counties.

In the U13 division OWE Zoo Crew, who made the journey from RAF Lakenheath with plenty of travelling support, went 2-0 to finish the day on top of their table.

In the older divisions, Basketball in the Community took an early 3-0 lead in an exciting U15 competition, whilst Great Yarmouth U18s won both of their games to sit on top of the senior table. Both divisions will be strengthened in future months by the impending arrival of Bury St. Edmunds Bulldogs (U15 / U18) and King's Lynn Basketball Club (U18).

In addition to monthly awards given to the division and team MVP's, all NYBL divisions feature an overarching league table that will see the top two teams at the end of the season face-off on Norfolk Finals day on Sunday 29th March 2020, marking the first time that junior teams will feature on the premier day of the Norfolk basketball calendar.

On the officiating side, the recently launched NYBL officiating pathway saw junior and senior referees and table officials from across the county registering to take part.

Elsewhere the NYBL were thrilled to welcome East Region Chair and VIP guest Angela Griffin who travelled from Herts to watch the region's newest competition unfold.

The next NYBL competition date is set for Saturday 9th November, whilst teams interested in joining the event are encouraged to register by visiting the How to Enter page on the NYBL website.